Teacher Karen Kline Shares Stories About Her Time As a Juror 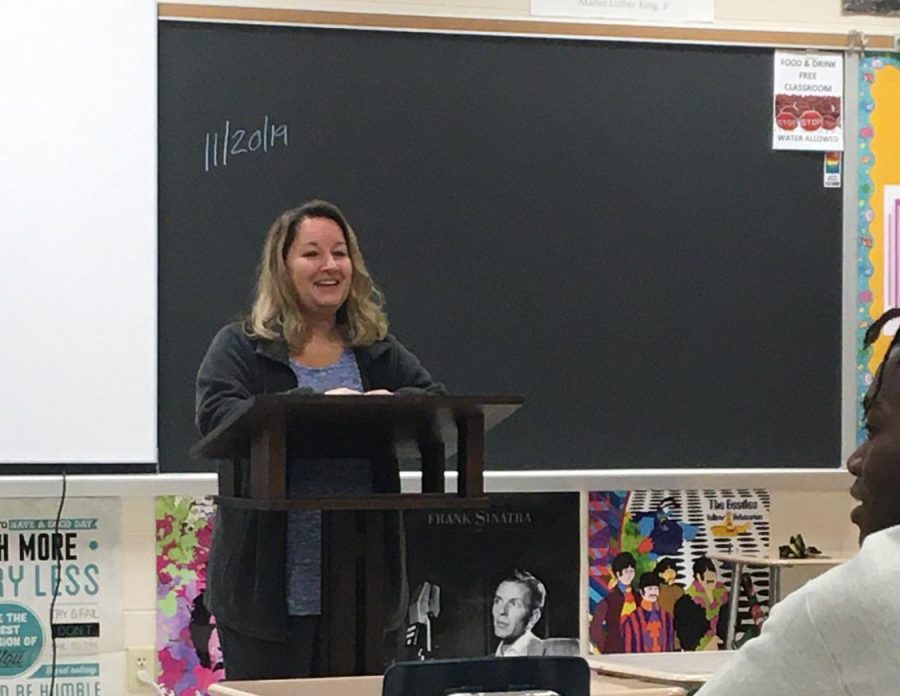 On November 12, Karen Kline a sixth grade English Language Arts teacher at the intermediate school was a guest speaker in street law teacher Marcie Barr’s class. She spoke about her time as a juror.

Kline agreed to be a guest speaker, and stated, “I thought it would be a good opportunity for [the students] to learn more about the process and the outcome.”

She talked to the class about what the process was to be selected as a juror and then discussed what happened during the trial. She told them about the various witnesses and how the jury made the decision of the verdict.

First, she discussed how she became a juror. Initially, the county pulled from a general pool of people, and they asked her several questions to narrow down if the court wanted her as a jury member. “Once selected to be on a jury, we were told to arrive at 8:45 a.m. and dismissed for the day around 4:30 p.m.”

Initially, Kline’s attitude towards being a juror member wasn’t good. “At first I was not enthused to be chosen, especially because it was a homicide. Overall, it was very interesting, but it’s not something I want to do again. It was stressful being put in that position, and the nature of the case added to it.”

On one of the first days, the judge explained to the jury the process of the legal system and what they were and were not allowed to do, but they didn’t explain any consequences that would occur if they were to break any of them.

The case was about a homicide for a murder that occurred on October 17, 2017, at an Exxon station in the city of York.”The defendant Mark Ellis was being tried for murder in the first degree, attempted armed robbery, and murder in the second degree,” Kline said.

By the end of the trial, jury members had to vote on whether Ellis was guilty.

“The jury’s decision had to be unanimous,” she explained. They found Ellis guilty on all three counts, and the judge sentenced him to life in prison without the possibility of parole. Kline said she agreed that this was the right punishment.

Barr’s street law class attended this trial on a field trip, and the students were able to watch the case unfold. Incidentally, a student recognized one of the jurors as a teacher in our district. Barr reached out to have her be a guest speaker for the class after the trial.

In regard to the actual trial, Biarr said, “it was interesting to me to be able to see the way the case progressed from the very start. In the past, we’ve shown up part way through and have had to piece things together as far as what was going on in the trial, but this time, we knew exactly what was going on the entire time.”

Between the trip to the court house and hearing the first-person account of Kline, Barr believes this was a very successful experience.

“As the teacher, what was really great for me was to see kids so engaged and interested in what was happening.  Sometimes trials can be sort of dull, but this was one that had kids’ attention the entire time. Students wanted to follow up and find out what happened in the next days.  I’m just really glad that students pointed out Ms. Kline and that she was so willing to come and talk to us. That kind of insiders’ perspective is something that we will rarely get to have, and this was such a unique opportunity for us.”

The class consisted of 21 students, who spent two hours at the courthouse, including the time it took to evacuate because of the fire alarm going off. “We were able to see the opening statements for a murder trial, and also hear several witnesses testify,” Barr said.

Kline said that the first class she spoke to was very engaged and well-behaved when she discussed the trial, but during the second class, three students were on their phones while the rest paid attention.