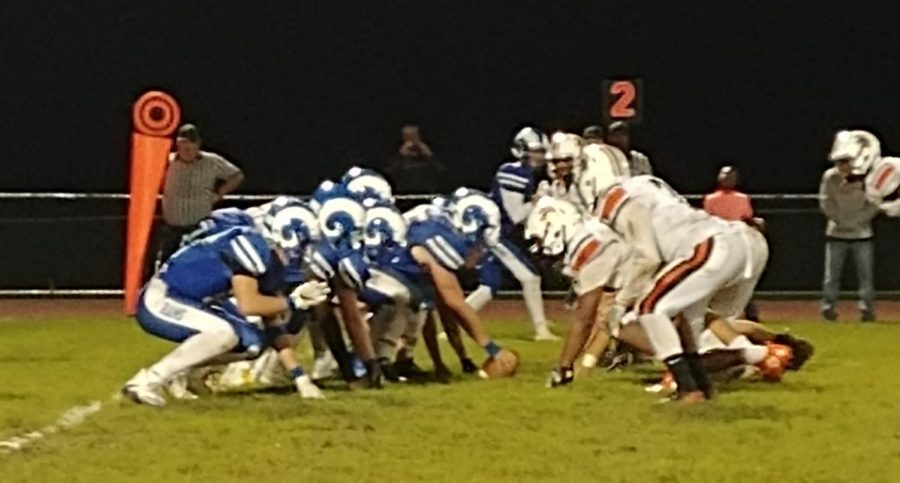 On September 21, the Varsity Football team played the York Suburban Trojans at home for the fifth game of the year, resulting in their second loss of the season.

The Rams won their last game against Big Spring 27-12, coming into this game with a 3-1 record and looking to stay undefeated at home this season. At halftime, the Rams lead 25-6; however, York Suburban managed to come back in the second half to win 31-25. 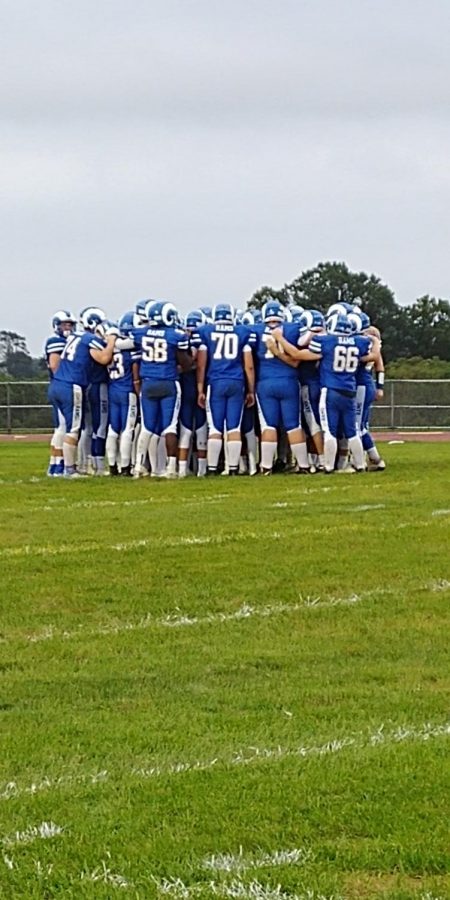 Gallery|11 Photos
Rams huddled up prior to kickoff.

Looking back at the game, head coach Christopher Grube said, “We took advantage of Suburban miscues, which led to points. We were aggressive offensively and that helped us move the ball down the field. Unfortunately, [York Suburban] did the same to us in the second half, which resulted in a loss for us.”

Senior quarterback Noah Hulslander said he knew that the game would be close, which it was in the end. Noah Hulslander also mentioned that he knew York Suburban was looking for revenge from last year’s game (the 13-12 last second Rams touchdown to win).

“We knew it was going to be a battle, but [York Suburban] wanted to win more than us; it hurts to say it, but you can not lie to yourself when you blow a 19 point lead. The loss hurts, but we are focused on Dover now and getting back on track,” sophomore Gabriel (Gabe) Hulslander said. 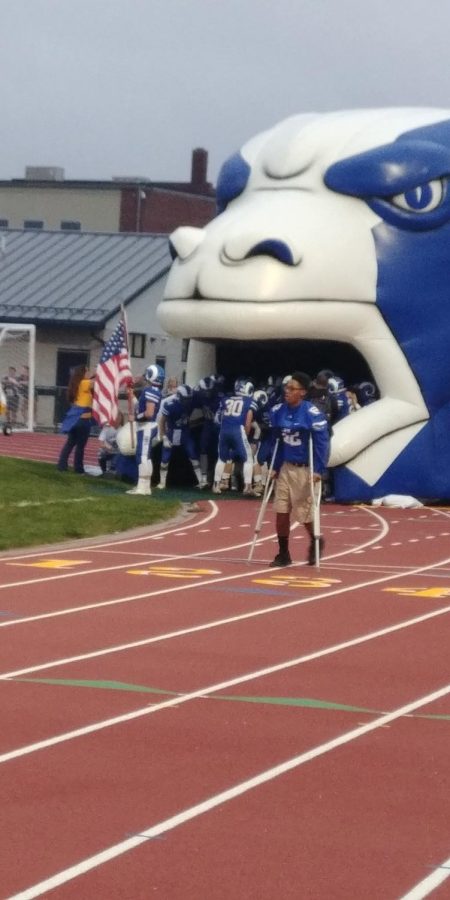 Gallery|8 Photos
Michael Zabkowski
The players getting ready to enter the field.

York Suburban won the coin toss and elected to receive the kickoff to start the game, therefore the Rams would receive the second half kickoff.

York Suburban could not execute on their first drive of the game and punted the ball to the Rams’ offense.

Unlike the Trojans, the Rams had no problems executing on their first drive. With about a minute left in the first

After the missed extra point, the Rams led the Trojans 6-0.

York Suburban answered with a touchdown of their own and tied the score at 6-6. The Trojans tried for a two-point conversion and failed; they went for two because they got flagged for a false start on the initial extra point attempt.

Junior running back Joshua Vipperman returned the York Suburban kickoff all the way back to the endzone for a touchdown, taking the lead over the Trojans 13-6.

The Rams defense came up big on the next York Suburban drive, forcing a punt and getting the ball back to the offense.

That next Rams’ drive was successful, with another Hulslander touchdown throw to Lowe with about seven minutes left in the second quarter extending their lead to 19-6 over the Trojans.

Gallery|4 Photos
Michael Zabkowski
Both teams lined up at the line of scrimmage before the next play.

The Rams offense got the ball back one more time before halftime.

That possession was taken advantage of as the Rams scored another first-half touchdown resulting in a 25-6 lead at halftime.

Gabe Hulslander said, “We played great in the first half, scoring 25 points. We came together and were able to string drives together on offense and stop [York Suburban] on defense.”

The Rams did get the ball to start the second half, but could not do much and punted the ball to York Suburban.

On that punt, it seemed as if York Suburban muffed the punt and the Rams recovered. However, the referees ruled that it was the Trojans’ ball.

“This was the biggest momentum switch in the game. I think if we get that ball, the game ends up differently. The very next play, [York Suburban] runs for a long TD run. It was demoralizing for our team,” Grube said.

As Grube noted, the very next play resulted in a Trojan touchdown run, and the Rams lead was cut down to 25-12 after the blocked extra point.

The next Rams possession ended with a three and out, forcing them to punt back to the Trojans.

York Suburban drove down the field to score another touchdown on their next drive, and the Rams lead shrunk to 25-18 after another failed two-point conversion attempt.

A little under halfway through the third quarter, in desperate need of a score, the Rams came up empty and punted the ball back to the Trojans once again.

Late in the third quarter, York Suburban scored a critical touchdown on the first play of their next drive to tie the game at 25-25.

Vipperman returned the ensuing kickoff back to the York Suburban 49 yard line, giving the Rams’ offense great field possession for their next drive.

However, the Rams’ offense did not keep the ball for long as they fumbled to York Suburban only a few plays into their drive.

A few minutes later, on a critical fourth down and four, the Rams could not stop the Trojans offense, and they converted for a first down.

A few plays later, it seemed as if York Suburban had scored a rushing touchdown; however, it got called back for a penalty, no score on that play.

Inside the 20 yard line, the Rams’ defense intercepted a York Suburban throw giving them another chance to take the lead.

However, the Trojans managed to keep the Rams off of the scoreboard on that drive, and get the ball back, giving them a chance to take their first lead of the game.

On the first play after the Rams punt, York Suburban had a huge run all the way down to the two yard line. If it were not for senior Jacob Rose making the tackle, York Suburban would have scored a touchdown on that play.

On the next play, however, the Trojans got into the endzone for a touchdown and took the lead 31-25 after the missed extra point. 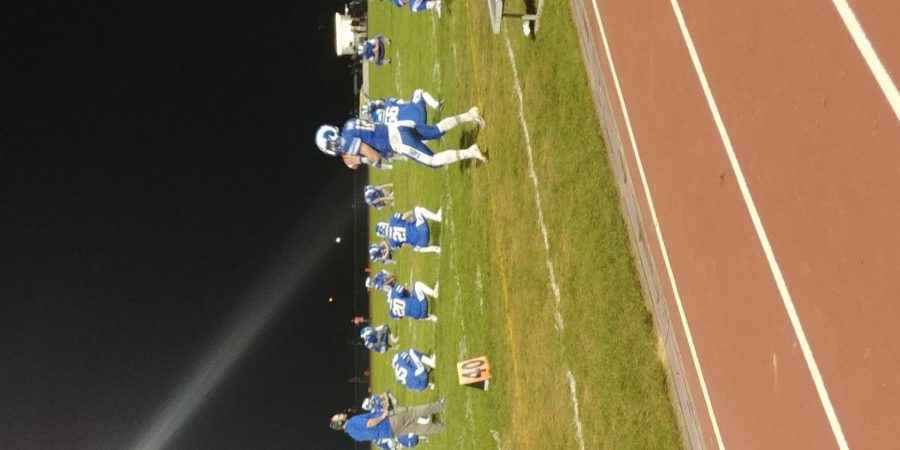 Gallery|5 Photos
Michael Zabkowski
Senior quarterback Noah Hulslander warming up prior to the start of the second half.

York Suburban head coach Andrew Loucks said, “We made a few adjustments at halftime on both sides of the ball. I was concerned, being down 19 points at halftime; we made a ton of mistakes in the first half, but I knew if we got on the same page, we would have a chance to win.”

With a little over two minutes left in the fourth quarter, on fourth down, with the game on the line, the Rams could not convert for a first down, ending their drive and giving the ball back to York Suburban.

With the game not over yet, the Rams’ defense made a huge stop on third down bringing up fourth down, but York Suburban chose to go for the first down on fourth down instead of punting the ball insuring that the Rams would have to drive the length of the field for a touchdown.

On that fourth down, the Trojans were able to convert for a first down; a huge play for the Trojans draining the chances of the Rams tying the game.

After a few knee downs, the clock hit triple zeros and the Trojans came all the way back from losing 25-6 at halftime, to winning 31-25. The Rams dropped to a 3-2 record on the season, this loss being their first home loss of the season.

“You have to give [York Suburban] credit for grinding out the game. We could not sustain drives on offense, and we could not prevent them from having big runs. We knew they were running the ball. We just got beat on our one on one battles in the box,” Grube said.

Loucks said that it was a big divisional win for the Trojans, and he wishes Grube and the Rams good luck on the rest of the season.

Furthermore, in the game against Suburban, seniors Wesley Forrester and Noah Kull both got injured and did not return after their injuries. “Wes and Noah will be out for a couple of week. Wes has an ankle issue and Noah has a neck injury/concussion,” Grube said. Forrester and Kull are both starters on the offensive line, and with both being injured, it is a big loss to the offensive line.

Hence the York Suburban 25 point comeback, Kull felt that the Rams did not play to the best of their ability.

The York Suburban running game was a big reason why they were able to come back and win in the second half. York Suburban had a game total of 331 rushing yards, 212 of those yards came from Trojans junior running back Savion Harrison. Harrison also ran for three touchdowns.

Noah Hulslander said, “We knew it was gonna be really hard to stop their run game; they have one the best backs in the county in Savion Harrison, and they have a big fullback, too. We knew it was going to be hard, but we were up for the challenge. We have a fantastic defense and everyone takes pride in having a strong defense; we just let a couple big runs slip through our hands, which hurt us in the end.”

Grube said “I thought [York Suburban] would lead more towards passing the football in the second half, but when our starters [Forrester and Kull] got injured, they went back to their original game plan [running the football], which was successful for them in the second half. We knew that [Suburban] could run the football; we made them look better than they are. Our defensive scheme was in place to stop the run, and unfortunately when players do not do their responsibility or when they get out worked, big running plays happen.”