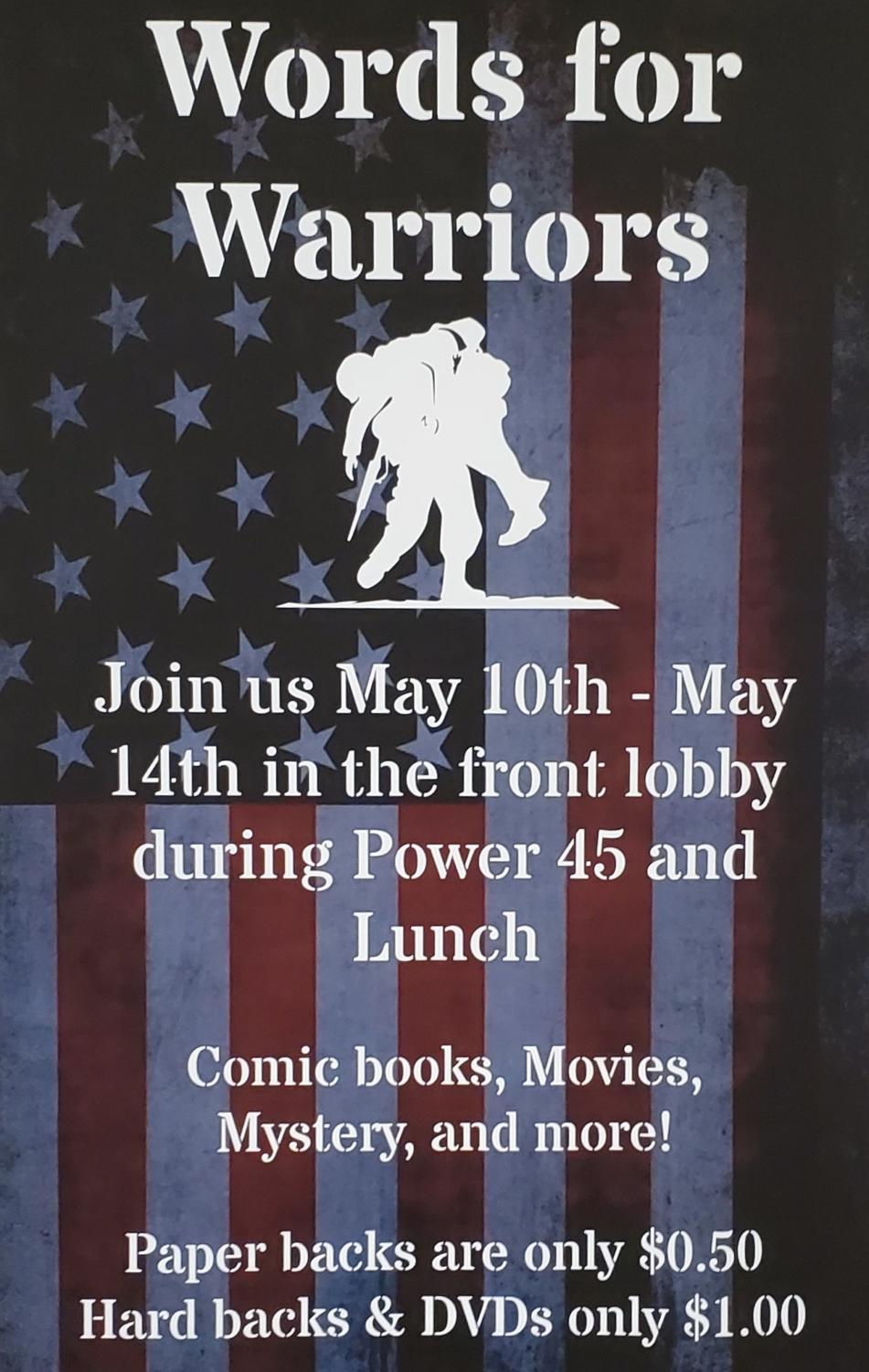 Students in Ed Smith’s Real World English class came up with and organized a book fundraiser they titled Words for Warriors, which is going on May 10-14. Profits from the sale of books will go to the Wounded Warrior Organization.

The class invited students and teachers to visit the lobby during Power 45, lunches, or period 9 and peruse the 1,000s of books, DVDs, and CD’s for purchase.

Prices are modest and have generated lots of interest with hard cover books costing $1 and soft cover 50 cents. There are books in all genres from mystery to children’s books.

Senior Duke Schwartz came up with the original motivation for a book sale after a class discussion. He recalled, “In class we were having a discussion about how people do not read as much as they used to and books that we liked as kids. Jacob Walters was telling Mr. Smith about the book “Prisoner B-3087”. I remembered seeing that book at book fairs when I was younger and said about how we haven’t had book fairs since we were in the West Building.

“[The book fairs] were always able to get me and other kids to buy books, because they looked cool even though we didn’t like to read much. I said that we should have a book sale like we did when we were kids and donate the sale’s money to a good cause. I thought that this would be a good way to bring us back to our childhood and do something good for the community.”

His peers agreed that they enjoyed the Scholastic Book Fairs in elementary school, and thought it would be fun to bring their own version to the high school.

“I was excited because the idea originated with them and their reminiscing about a time in their younger years when they actually enjoyed reading,” said Smith.

The class decided that the proceeds should go to a deserving cause and brainstormed different charities they all thought would be deserving. Each student wrote down three charities. Then, they created a class list, getting rid of duplicates and finding a way to whittle down charities that supported the same thing. Then, as a class they voted on a favorite.

“We had a three-way tie so we voted again, and the Wounded Warrior Project got the most votes,” senior Twylight Dieter said.

The class then took the extra steps to research the charity and be sure the money they raised went to the best, most reliable program. 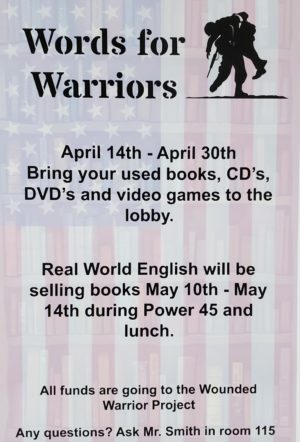 Smith then worked with the students to generate a timeline for the event and brainstorm the many things that needed to be completed before the event, such as: making a video for the morning announcements, making posters to hang around the school, and deciding when the event could occur throughout the day, to name a few.

Students used class time to prepare for the event. According to both Dieter and Schwartz, everyone in the class jumped in to contribute to the project. They divided the many tasks necessary to organize this event, such as: create marketing materials to advertise the event, make passes for students to attend the event, write a script and record it for the morning announcements.

Schwartz stressed, “We even got help from people outside of our class. [Senior] Colin Lengal recorded, edited and shared our videos to the announcements. He took time out of his classes and free time to help get the videos done.”

The class asked students, faculty, and staff to place book donations on the table in the lobby or drop them directly to Smith’s room. They received more than they had thought they would.

“All of the donations we received have been out of this world. To start, we received over 1000 books, DVDs and CDs/audio book. Students from all grades in the school helped out in the school so much and I can’t thank them enough. Without all of them we wouldn’t be able to do this””

Once the class received donations, Smith tasked them with grouping them by genre. Students had to read the texts book summaries/blurbs to determine which genre it fit into.

“One of the most challenging parts of the job was determining which genre specific books belonged to. This is a difficult task for even the most skilled book enthusiast, however, as some books can go into

multiple categories (e.g., the same John Maxwell book could be classified as self help, religion, or education),” Smith said.

On the day sales began, students worked together to organize books, set up tables, and take turns overseeing the event during Power45 and lunches. They were prepared to make change, take donations, and help students/staff locate books.

Aid Terri Bracey said “Many of [the students] said they did not realize how much work had to go into planning something like this, and it is awesome to see them learning so much in this process.”

Smith also notes that the hard work was met with “Big Braining”—the class mantra. He said whenever a lot of thought had to go into a part of the event, students had a “big braining” day. “In a classroom environment that has become so sterile because of the pandemic, it was a relief to get back to something that seemed so natural,” he said.

Students and staff have enjoyed the book fair, which is on-going until Friday.

President of Library Society Hannah Horant, who purchased seven books, said, “I quite enjoy it; I found it really easy and really nice. It’s a lot like the other book sales I’ve been to. It was cool.” 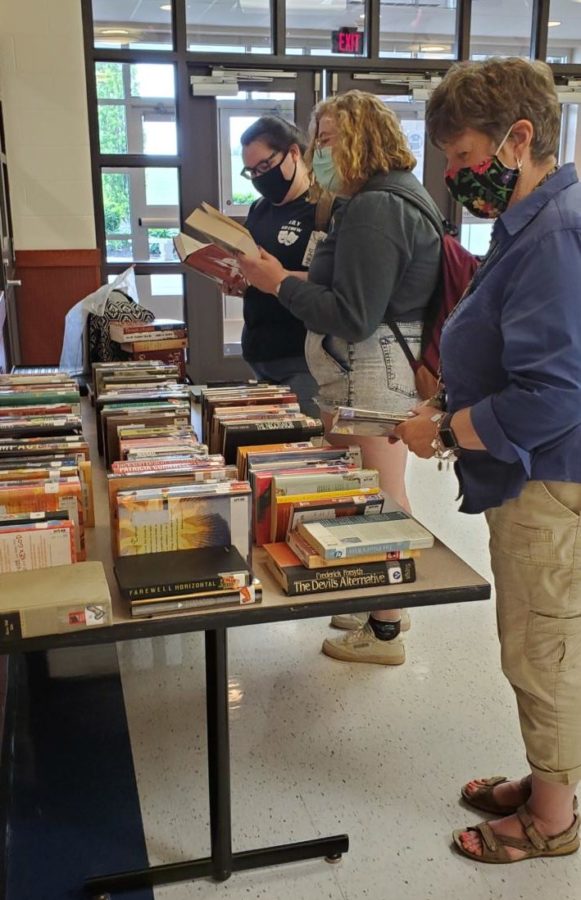 Students in the class are surprised and pleased with the interest and turn out of the sale.

“I am amazed at how much support we have gotten. There are always people looking at books and most of them buy the books. It is great to see so many people finding something new to enjoy or something to give to someone,” Schwartz said. Dieter echoed the same sentiments.

Any books that the class does not sell, they plan to donate to some place that has wounded warriors or veterans that can use them, Bracey said.

At the end of the day, it’s a rewarding experience for many. Students and staff can purchase books at a reasonable price. Funds raised goes to a deserving charity, and Smith’s real world class learned how to host and organize a charity event—a real experience everyone hopes to see these students do again in the future.

“I’ve been amazed on so many occasions throughout the process. I’ve seen students step up and do KRAM announcements when they never would have dreamt of doing that. I’ve seen students get excited about specific books, when oftentimes the prospect of reading is met with indifference or even displeasure. And perhaps the coolest thing, I got to see a class come together and work together to realize a goal that they set for themselves,” reflected Smith.