The Rams Demolish The Dutchman

The boys basketball team took on the Anneville-Cleona Dutchmen at home on February 7.as the Rams punished the Dutchmen in the bout.

To begin the game, center Garret McCleary won the tip off which led to a lay up from freshman Dylan Logue.

The Rams defense was off to a quick start with a huge block from forward Koy Swanson immediately following the rams layup.

The Dutchmen recovered the ball off of the block, but guard Levi Shartnetzka had a steal and a lay up to follow.

The first quarter was a rampage for the Rams as Swanson drained back to back 3-pointers.

Sharnetzka continued the entourage as he matched Swanson’s team high of 6 points. The score sat at 16-9 Rams with one minute left to play in the first.

With five minutes left to play in the second, McCleary slammed down a huge dunk to stretch the Rams lead to 12.

McCleary said, “It felt surreal to dunk in a game. As soon as it happened you could hear the roar from the stands. Definitely one of my greatest experiences.”

The Rams began to pass the ball with authority as they had begun to punish the Dutchmen with two minutes left.

McCleary capped off the first half with a lay up to stretch the lead to 14.

The Rams picked up right where they left off as they held the Dutchmen to no points for two minutes while they continued to pour it on.

Excellent passing continued for the Rams as they continued to stretch the lead more and more.

At the end of the third quarter the Rams had widened the lead to 46-16.

The scoring began to be distributed very well in the start of the fourth as senior Gabe Ragland rallied for 4 points of his own.

The Dutchmen had a three to cap off the game as it ended 56-25 Rams in an absolute blowout for the Rams at home. 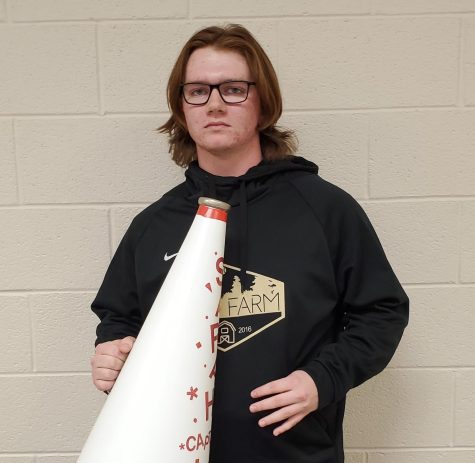 Hi, my name is Peyton, and I am a senior. I took journalism again because I liked the class the first time.

Some of my interests are baseball, Star...