During the years of schooling that the average student has, there will be a handful of teachers who simply give work, grade the work, and repeat. Ronald Brosse does not fit under this category.

Ronald Brosse has been teaching since 1994, starting here in 2000. He gained his first teaching experience as a teacher at Bradley Academy for the Visual Arts.

But, after 28 years of teaching, he is retiring at the end of this school year at age 62.

When he began here, he was both the Dean of Students and the Physical Education teacher for grades 9-12. His position changed to the health teacher in 2005, and he has been in this position ever since.

Growing up, Brosse didn’t always want to become a teacher. 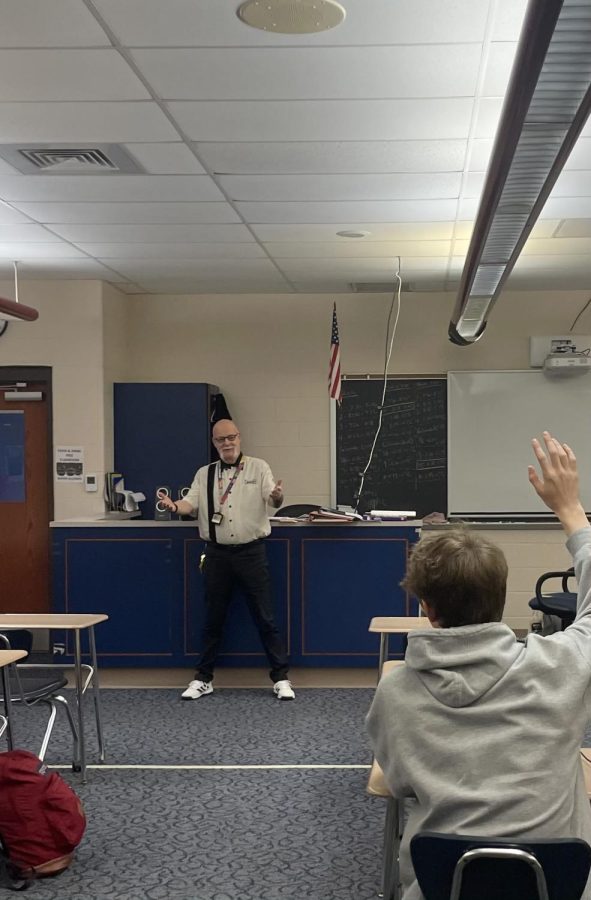 “I was a junior in high school when I decided [to become a teacher]. I was kicking around a couple of other things, everything from becoming a chef to a forest ranger,” Brosse said.

He then further explained that being a teacher meant he was doing something impactful and that’s what he wanted to dedicate his life to.

“Brosse seems to really care about his students and I really enjoy how he lets overwhelmed students sit in his classroom. That really shows how charismatic and thoughtful he is” said sophomore Allysen Stewart when asked her opinion on her health teacher, Brosse.

After many years of teaching, Brosse’s least favorite lesson to teach was always about drugs, specifically marijuana.

When asked about his lessons on marijuana, he said, “No matter what factual information I give, the large portion of the student body thinks that I’m just an old man yelling at them. They think that nothing is wrong with it just because it’s legalized. Just because it’s legal, doesn’t mean that it’s safe.”

On the flip side, Brosse has always enjoyed teaching about sexually transmitted infections (STIs)s. He finds it comical that students don’t think about the consequences to their risky behaviors.

The struggle that the majority of teachers face is the amount of out-of-school time that grading and planning takes. For Brosse, his homework takes up 10-15 hours a week.

“I’m always having to change things up, I try to think of new projects and give the students the most new information,” said Brosse.

Because of the constant presence of adolescence in his work life, his family time was cut short. By the time that Brosse would come home, he would often be too burnt out to spend time with his children.

In the little free time that Brosse finds himself having, he enjoys collecting strange objects. One of these includes puppets, which he displays in his classroom.

“When I don’t get a response from my students, I’ll go over and talk to them [the puppets]. I go ‘Oh! I get as much as a response from them as I get from you guys!” Brosse said regarding how he uses his puppets in class.

Throughout his years of teaching, Brosse has become familiar with traits that students must possess to be good students.

“To me, a good student is one who cares more about learning and growing rather than just earning the grade,” he said.

For new teachers, Brosse’s best advice would be to think outside of the box. He believes that a good teacher looks at the given curriculum and finds ways to loop outside information into it.

After he retires, Brosse will miss the interaction with the younger generation. His retirement plans include traveling the country, experiencing new things, and finding another job, possibly also in the education field.